Leaving Santa Barbara for Paris, Sara’s modest proposal: I’ll send you words. Make a page to go with them, she said, then tell me what comes next. You won’t see my pages. I won’t see yours. The words we’ll share in common. At the end, we’ll find ourselves in the bargain we’ve struck with each other. Great, I thought, an illustrator who can’t draw for shit. Up to my monkey mind in unresolved grief–over my mother’s death, over the collapse of my marriage to Sara’s brother–I’m in, I said. Hit me. Sara threw me a line. It became thread through the labyrinth, clothesline enough to hang myself with, fragments shored against my ruin, an unfamiliar garden long seen but known for the first time.

Who wrestled with whose angel? I became Narcissus at his well; Icarus at take-off; Orpheus in the Underworld; shaman; fool; slut; Destroyer of Illusion; Brunhilde at the pyre; tyger in the forest.

I first saw Sara’s book in progress what turned out to be a third of the way through. We hadn’t yet settled that ten exchanges would bring us home. Later on, our correspondence turned tug-of-war, at least for me, Sara’s next line arriving from Paris or from back in California to skew my course, as I waded deeper and deeper into self-absorbed allegory and psychodrama. Early on we agreed to pull the objects of our own choice from the glory hole. Near the end we’d begin to edit one another’s initial drafts, neither the words nor the intentions behind them any longer wholly our own. Sitting side by side at my worktable on another visit, we finally found that a clothesline tied us together, tethered our end to our beginning. I lumbered toward a smoky coda. Sara, I saw when we shared our final pages, had tripped toward hers in full sunlight. Bruckner and Vivaldi collaborating on a fugue. I look at Sara’s pages now admiring their clarity, their whimsy and delicacy of touch. Her courage in simple design, her trust that the right shape is sufficient unto itself, her unshakeable conviction that if a little strong colour is good, a superabundance is nothing sort of fabulous. My unfamiliar garden is a single flower walled off behind scissored Proust and trompe-l’oeuil; hers explodes like a coked-up botanist’s fantasy, cheek by jowl with the morning’s laundry.

I forget now sometimes, until I do the math, whose words were originally whose. Reading Sara’s book will never tell me. Lines of text break up onto multiple pages; or run together; or dissolve into form; or fall away altogether. The scent of roasting chestnuts, the sound of water lapping at an ancient quay: she set them down in different worlds. Her “ah” at the edge of speech verges toward sheer colour. I highjacked Sara’s language; she highjacked mine. To one another’s intermittent perplexity; at the end to mutual delight.

How might I empty my mind entirely of my own book, reading hers? What does it say about me that I can’t? But then, we set out to surf the line where self curls into other. I look now at what I couldn’t see at the time, a vision that sustained me though I was aware of only its merest trace, would see it whole only after the fact; her book the unconscious of my own, giving it life; a lightness and energy that bore me along the face of the wave that had gone over me.

On a sensible day, a week before losing not two but two dozen inhibitions, Mouffetard made a momentous decision. He opened a cabinet in which was filed thirty years’ correspondence with someone he had never met in the flesh. The first letter brought tears to his eyes. The second left him confusing insight with ecstasy.

The seventh letter inspired him to dig around in his Glory Hole where he found some banknotes in a currency no longer accepted as legal tender. The discovery called up the scent of roasting chestnuts and the sound of water lapping at an ancient quay. On the third day, he remembered he’d forgotten to put a coin in his mother’s purse so she would have something to give to Harrison on her afternoon walk. Her resources of improvisation were considerable; but he still felt deep regret at the oversight.

His reverie, however, was interrupted by the next letter, which startled his vocal cords into inarticulate sound. It came from his body; or else from a place in his soul that had little truck with his monkey mind. All it was, was “Ah.” When he failed to make the “ah” again, he made a pot of tea and reread the letter. “Enough already with the half-baked koans,” he muttered. “I don’t have all century for this.”

He went to his father’s desk, took out paper, ink and a bamboo brush, and began to write. Laying down his brush at the end of a page, he tore a leaf from Remembrance of Things Past, and rolled a joint. “Regret will not bring back what I have lost,” he thought. “But losing my fist might give me back my hand.” 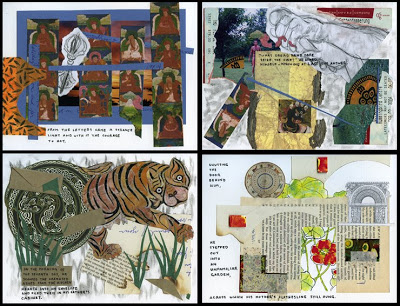 From the letters came a strange light, and with it, the courage to act. “What dread hand dare seize the fire?” he asked himself – knowing the answer at last. On the morning of the seventh day, he scooped up the cremated ashes from the kitchen hearth into an envelope and filed them in his father’s cabinet. Shutting the door behind him, he stepped out into an unfamiliar garden, across which his mother’s clothesline still hung.